Soybean in Russia - reality and possibility 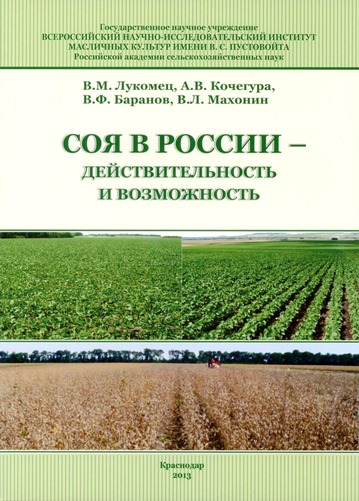 Soybean in Russia - Reality and possibility

In this popular science review the versatile value of soybean, the history of its spreading and production condition are presented; the growth reserves of soybean amounts at the expense of crops expansion and productivity increase are shown; the role of varieties,  seed growing and и scientific technological developments in productivity increase of agrocenoses is highlighted; there is described the significance of business factors and State support of this important and new crop for the European region for the development of the country's agroindustry; there are shown the real prospects of the development of soybean growing on the basis of scientific and technical progress - as a valuable protein and oil crop having a strategic role of socio-political, economic and ecological importance.

The book is meant for management employees of agroindustry of Russia, and also for everyone who is interested in destiny of soybean growing in the country.

You can buy the book for 150 roubles (postal services are not included) by filling the order form. 167 books are in stock.