The school of young scientists! 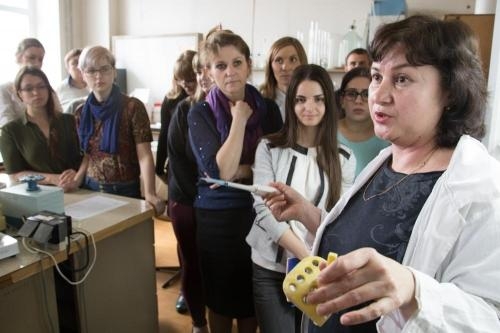 On April 3-4, 2018 in the walls of the All-Russian Research Institute of Oil Crops by Pustovoit V.S. "The School of Young Scientists: Modern methods in breeding and cultivation technology of oil crops" was held.

Such School is held at the Institute regularly every two years, but for the first time it was held in the format of a regional event, with invited lecturers and practical classes.

Academician of the Russian Academy of Sciences V.M. Lukomets made a welcoming speech, wishing the participants a fruitful work. For these two days, the young scientists listened to 10 lectures by leading experts in their fields of science. The speakers addressed such topical problems as sunflower breeding for oil quality (Doctor of biology, Professor Demurin Ya.N.) and immunity to broomrape (Doctor of biology Antonova T.S.), new methods of breeding of oil cole crops (candidate of biology Gorlova L.A.). In the agrotechnical part of the reports, the students learned about the peculiarities of the application of fertilizers in oil crops (Doctor of agriculture Tishkov N.M.) and modern methods of combating diseases and pests in crops (candidate of agriculture Semerenko S.A.). Academician of the Russian Academy of Sciences Tilba V.A. in his report revealed the essence of the interaction of soybean plants and its microsymbionts during the growth season, and also highlighted the relevance of studying the problem of plant-microbial interaction in general.

Professor Tsatsenko L.V., invited by the organizers from Kuban State Agrarian University, presented a richly illustrated and informative report on the iconography of plants. In addition, the doctor of sciences Zelentsov S.V. told "schoolchildren" about the methodological foundations for the formulation of scientific ideas, and how elements of TRIZ (Theory of Solving Inventive Problems) can be applied in research activities. Deputy Director for Innovation of All-Russian Research Institute of Rice Mukhina Zh.M. spoke about the culture of anthers and the culture of microspores as methods of cell breeding, as well as about the basic principles of molecular marking of genes of economically valuable traits and the results obtained in All-Russian Research Institute of Rice using these modern breeding methods.

The report of candidate of economy Krivoshlykov K.M. on the methodology for calculating the economic efficiency of an element of agricultural technology, where he gave formulas for calculation and pointed out the possible errors in this process was very valuable from the practical point of view.

An informative practical lesson was conducted in the Laboratory of Immunity and Molecular Marking (leading researcher Gutchetl S.Z.) on the methodological aspects of DNA isolation from plant tissues and on conducting the PCR analysis. The young scientists heard a captivating story about all the stages of creating biological preparations against pathogens of sunflower diseases in the biomethod laboratory (Doctor of biology Maslienko L.V.). The stages of creation of CMS-hybrids of rapeseed and the method of hybridization of plants of this culture were shown in VNIIMK's greenhouses (Doctor of biology Bochkareva E.B.). Modern developments in the field of breeding and agricultural equipment and equipment for seed cleaning were demonstrated by Doctor of technology Shaforostov V.D. and Makarov S.S. on the base of the mechanization department.

As a result of the School of Young Scientists, it was decided to continue to conduct it in a similar format, expanding the range of scientific problems in the subject of the event, as well as expanding the geography of participants.